Post 6 – VIRGINIA FESTIVAL OF THE BOOK AT CHARLOTTESVILLE, VA.

Last Wednesday, March 16, I traveled with my wife to Charlottesville for the big state book festival. We drove southwest on Interstate 81, up the Valley, for those not familiar with local and military terminology. The drive was spectacular and again I was reminded why I am blessed to be a Virginian and living in one of the most beautiful places on earth. 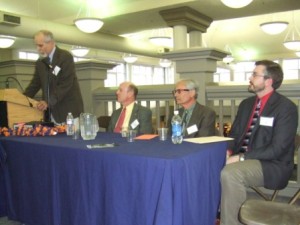 We arrived at the Barracks Road Ruby Tuesday at 11:40 and our rendezvous with our moderator, Rick Britton and his wife Victoria, and two other authors/historians who would serve with me later in the evening on a panel titled “Civil War: Going to War and its Aftermath.” We met Jeff McClurken, University of Mary Washington’ History Dept chairman, and UNC-Charlotte’s David Goldfield. David also brought along one of his friend’s Blaine Brownell. I later discovered that Blaine had attended my alma mater, Washington and Lee, and he had been a classmate of one of my uncles. Small world.

This was the initial meeting for our group. We discussed the War, the format for the evening’s panel and history in general. One of the conversations that still stands out was the discussion on truth and legitimacy in historical research. We all agreed the field has no place for plagiarism, stealing, and document falsification. Jeff even mentioned that he has used some of the recent acts of historian infamy in his classes to stress the importance of ethics while conducting research.

Jeff’s recent book, Take Care of the Living: Reconstructing Confederate Veteran Families in Virginia, came out in 2009 published by University of Virginia Press. Jeff spent many years scouring soldier and family records from Pittsylvania County and the Danville, Virginia area to determine how these Confederate families coped with the War’s devastation to their way of life. For more see Jeff’s website at http://mcclurken.org/

David Goldfield’s new book had just been released the previous day. America Aflame: How the Civil War Created a Nation [2011, Bloomsbury Press] is a massive book that looks into the causes and costs of the War. David noted that obviously diplomacy failed, and the advent of war was and still is a national tragedy. I agree! This country was the only slaveholding country in the world that fought a war to end the evil system of bondage. Other countries abolished slavery without resorting to a full-scale shooting match. The leaders, North and South, failed this country by not seriously negotiating a peaceful settlement. Another aspect that David discusses in his book and spoke later that evening on was the affect religion brought to politics and the advent of war. Immigration, primarily Protestants versus Catholics helped stoke the smoldering situation David argues. For more on David see his website http://www.davidgoldfield.us/ 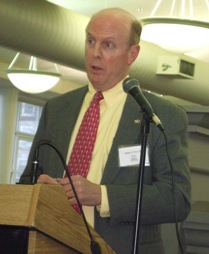 After lunch we all went our separate ways to meet again for the 6 p.m. panel discussion at the University of Virginia Bookstore along with a book signing at the end. During the interim, my wife and I walked amongst the headstones and soldier’s monument at the Confederate cemetery off Alderman Road. Later, we headed to the historic area of town to browse shops and bookstores. We sampled coffee at the Mud House where the strength of the brew caused me to sweat and shake. Not a good thing for the later panel discussion.

Several bananas later I was happily decaffeinated and we arrived at the UVA Bookstore. Each of us spoke for about seven minutes on our recent books and then our moderator Rick Britton allowed the audience to ask questions. Rick also threw some questions our way too as he monitored the show. He is an accomplished historian and cartographer too. His recent book   Jefferson: A Monticello Sampler won a book award and numerous history books have incorporated his maps. For more on Rick’s work seehttp://rickbritton.com/

By the end of the evening, my only regret was not enough time to discuss other causes for the War. I believe that free trade [South] versus restricted trade pro-tariff [North]policies helped fan the flames of war a lot more than most Americans have considered. However, that topic will have to wait for another day.

All of the panelists agreed that it was fun. The audience had been wonderful and the UVA Bookstore is a great venue. Long live Mr. Jefferson’s educational legacy! Many thanks to the volunteers and staff of the 2011 Virginia Festival of the Book for a great event and for inviting me to be there.
http://www.vabook.org/site11/participants/details.php?partID=51