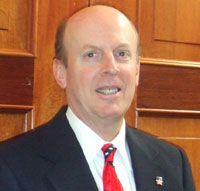 John J. Fox grew up in Richmond, Virginia where he graduated from Collegiate School. He spent four years at Washington & Lee University and received a BA in U.S. History in 1981 and then served for seven years in the U.S. Army. He has authored three historical books while editing several others. His articles have appeared in Civil War Timesmagazine, America’s Civil War magazine and numerous newspapers. Fox lives with his family in the Shenandoah Valley.

VA Festival of the Book

Signing a book at University of Virginia bookstore after CW panel discussion for March 2014 Virginia Festival of the Book in Charlottesville.

Why do I write about the War Between the States?

I grew up in Richmond, Virginia and was born in 1959 just before the centennial of the War. When I could barely walk my Dad began taking me to battlefields around the area. So I guess I could blame this passion that I have on him. My interest in the Civil War grew with age and then I moved to Lexington, Virginia to attend General Lee’s school. Visiting Lee Chapel and seeing the recumbent statue of this great man and then descending the steps to the Lee family mausoleum in the basement certainly was part of my spiritual journey as a U.S. History student at Washington & Lee University. Echoes of the past resonate throughout the Lexington area. During my four years in this beautiful town, located in the heart of the Shenandoah Valley, I was able to breathe in the excitement and sadness of previous events. It is not difficult for me, even today, to visit certain bloody places in the Valley and to close my eyes and hear and feel the pound of hooves and explosion of shells.

After college, I served in the U.S. Army as a pilot, and my last duty station was at Fort Benning, Georgia. There, I picked up more kernels of history but little did I know that a chance meeting with a frame shop owner would propel me on my writing path. While having a Don Troiani print framed, the shop owner showed me an original letter written by one of her Confederate relatives. She then allowed me access to the rest of the letters written by this young Georgia infantryman back to his mother. I transcribed the letters, and this effort led to my first Civil War book, Red Clay to Richmond: Trail of the 35th Georgia Infantry Regiment [2004]. While doing research for this book, I discovered information about a little-known but incredible battle which ended the Petersburg Campaign. The Battle of Fort Gregg led to my newest book The Confederate Alamo: Bloodbath at Petersburg’s Fort Gregg on April 2, 1865 [2010]. Think of 334 Confederates, given a suicide mission by General Lee to “hold at all hazards”, defending the fort for more than two hours against a tidal wave of 4,400 Union soldiers. The result – 14 Union Medals of Honor and the entire Confederate garrison lost. The fight at Fort Gregg was the nastiest little battle that you never heard of.

I am blessed that I have been able to combine my need to write with my love of history. My goal is to discover historical events that have not been written about before and then use primary documents recorded by the participants to allow the reader to go back in time. If while reading one of my Civil War stories, you can feel the heat from the campfire, smell the aroma of cooking bacon or see the enemy while sighting down the barrel of a rifle, then I have been successful.