If you want to really know what thoughts, ideas and feelings rambled around in the minds of people from the past then the best place to begin is their letters, diaries and period newspapers. These are called primary sources. The problem though is that too many authors/historians today are too lazy to track down primary sources and they rely on secondary sources which is how a lot of nonsensical “history” (fabrication) gets passed down.

As the bone-chilling cold continues to cover the Shenandoah Valley I thought back to a an account written by Sam Watkins from his famous book “Co. Aytch” which details his life during the War Between the States while he served as a private in the 1st Tennessee Infantry Regiment. The below account comes from pg 62 of the book and Watkins recorded his sentiments during the first week of January 1862 when he went to relieve a picket detail early in the morning prior to sunrise as the temperature hovered near 0 F. The 1st Tennessee was part of Stonewall Jackson’s Romney Campaign and the sad scene took place near Bath, Virginia which is now Berkeley Springs, West Virginia just north of Winchester. 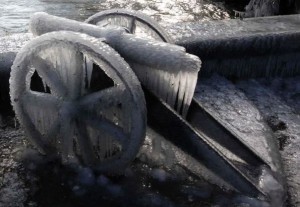 “At a little village called Hampshire Crossing, our regiment was ordered to go to a little stream called St. John’s Run, to relieve the 14th Georgia Regiment and the 3rd Arkansas. I cannot tell the facts as I desire to. In fact my hand trembles so, and my feelings are so overcome, that it is hard for me to write at all. But we went to the place that we were ordered to go to, and when we arrived there we found the guard sure enough. If I remember correctly, there were just eleven of them. Some were sitting down and some were lying down; but each and every one was as cold and as hard frozen as the icicles that hung from their hands and clothing – dead! They had died at their post of duty. Two of them, a little in advance of the others, were standing with their guns in their hands, as cold and as hard frozen as a monument of marble – standing sentinel with loaded guns in their frozen hands! The tale is told. Were they true men?”