I am very pleased that the March/April 2015 issue of Confederate Veteran featured as their cover article my piece “The Confederate Alamo: Bloodbath at Petersburg’s Fort Gregg on April 2, 1865.” I wrote this article to commemorate the 150th anniversary of the bloody battle and it is based on my 2010 book of the same title. 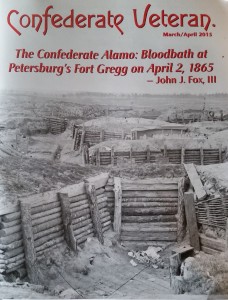