In my previous blog I detailed the wounding and capture of a Georgia Confederate soldier from Troup County on the western Georgia line near LaGrange. Private John Rigby from the 35th Georgia Infantry Regiment was struck down at the Battle of the Wilderness. His wife and immediate family had no idea what had happened to John because when the war ended he never returned to the family farm. He left behind three young sons and his wife, Nancy A. Scogin Rigby, never gave up hope that he would return home. When she died in 1897 she ensured that a spot would be left vacant next to her grave for John. [see blogpost on 4/15/2015] 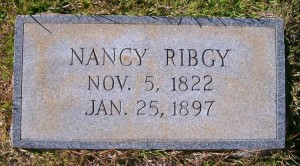 What they did not know was that early on the morning of May 6, 1864, Rigby and his fellow Georgians manned the Confederate line along the Orange Plank Road that sliced through the tangled undergrowth of a place in central Virginia named The Wilderness. Then suddenly, surrounded on three sides by Yankees, the Georgia Confederate line [Edward L. Thomas’ brigade] broke amidst the smoke and a hail of bullets. In the chaos, something hit Rigby and he went down, wounded again. He had been shot two years before in the right thigh and left breast which had collapsed a lung. This initial wounding kept him out of action for six months while he recovered.

Yet his arrival at the notorious Federal prison located in Elmira, New York would begin the most desperate struggle of Rigby’s life. He died at “Hellmira” nearly a year after his capture and almost a month after the surrender of Robert E. Lee’s army at Appomattox.

Now fast forward to the 20th century. Some of Rigby’s descendants discovered that he was buried in Woodlawn National Cemetery in grave 2756 on the outskirts of Elmira. In September 1995, James and Wanda Pollard from McDonough, Georgia made the long drive to Elmira to visit the grave of Rigby who was James’ great-great grandfather. Their vehicle held a 20 pound bag of red Georgia clay that they spread over his grave. James said, “He [Rigby] was true to the end. In the end John probably knew he would never see Southern soil again, so I thought I would bring some Georgia soil to him.” 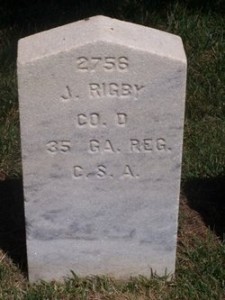 The family of the 35th Georgia Infantry Regiment’s John Rigby finally had their closure on his demise.