A recent newspaper article in the Winchester [Va.] Star [July 23, 2011] by Stephanie Mangino clued me in to the recent work of Shenandoah Valley artist Radford Wine. Radford worked in the marketing field until he decided to pursue his love of painting in 1991. Since that time he has been quite successful and his art website www.radfordwine.com is testimony to his creative talent with a brush and canvas. However, for the past three years a debilitating illness has left Radford unable to paint. Frequently bedridden in pain, he decided to turn his artistic vision in a new direction. 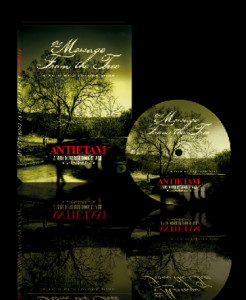 Radford combined his life-long interest in the Civil War with a long-ago written poem that focused on a young sycamore tree which stood on the Union side of Burnside’s Bridge at the Battle of Antietam or Sharpsburg. The result is an 18-minute film titled A Message from the Tree – Antietam: A Very Different Look at War. This work combines both narrative short film and documentary style filmmaking. I watched the film with several family members and at the end all we could do was look at each other and say “Wow!”

The film does not focus on the glory of war or the winners and the losers, but instead portrays man’s inhumanity to man. The remarkable thing is that the tangible results and ugliness of war is told from the overarching point of view of this now 50-foot tall sycamore tree that still guards the eastern approach to Burnside’s Bridge. Through a combination of the written word, the spoken word, visual images and music, the trees sad perspective provides a powerful link to America’s greatest tragedy.

Radford combined with award-winning cinematographer Mike Yamrus to make A Message From The Tree. The duo just released their second collaborative effort If Only I Spoke – Pickett’s Charge: A Very Different Look at War. This 22-minute film gives voice to a Union cannon that stands on Cemetery Ridge next to the copse of trees that became the focal point for the ill-fated Confederate attack on the third day at Gettysburg. I plan to provide more info on the Gettysburg film in a future post.

To see two fresh and thought provoking perspectives on the Battles of Sharpsburg and Gettysburg visit www.messagefromthetree.com and   www.ifonlyispoke.com